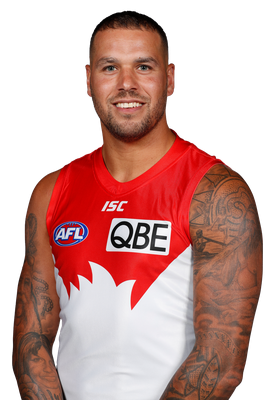 Lance Franklin is a giant of the game. The star Sydney Swans forward has played more than 300 AFL games, is the seventh-greatest goal-kicker in VFL/AFL history, is one of just five men with eight All Australian blazers and is the most recent player to have kicked 100 goals in a season. The Western Australian is also one of just two players in the game’s history, along with former Swan and Saint Tony Lockett, to have booted 300 goals for two clubs. The former Hawk was added to a leadership group for the first time in his career ahead of season 2020, joining co-captains Josh Kennedy, Luke Parker and Dane Rampe, as well as Callum Mills. But the 33-year-old, who was named captain of the 2018 All Australian team, has long been considered an exceptional unofficial leader, so great is his impact on Will Hayward, Nick Blakey, Ben Ronke and the rest of Sydney’s young forwards.