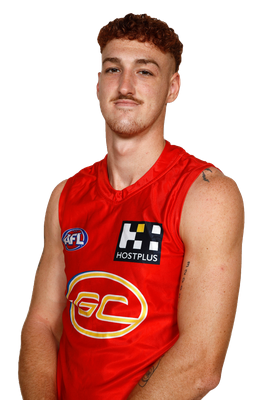 Matt Conroy was pre-selected by the Gold Coast SUNS as an Academy graduate at the 2019 NAB AFL Draft. Originally from Townsville, Conroy, nicknamed Sauce, relocated to the Gold Coast in the latter stages of his underage career. He represented the Allies at the NAB AFL Under-18 National Championships and also played for the SUNS in the NEAFL as an Academy top-up player. The big ruckman enjoyed a fine 2019 season, impressing with his tap work and his improved ability to cover the field. The 199cm ruck/forward prospect has a good vertical leap, while he is quick for his size. He will be hoping to develop his craft further in 2020 to prepare for an AFL debut.