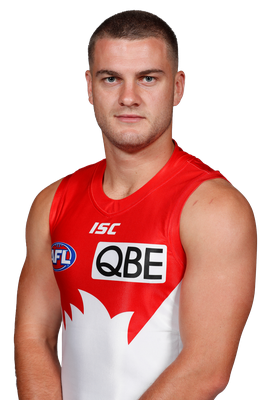 Tom Papley swapped his plumbing tools for a Sherrin when the Sydney Swans sprung a draft surprise in 2015 – and the pocket-rocket forward has since become a crucial member of coach John Longmire’s side. Papley has played 20 or more senior games in every one of his four full seasons in the AFL and was at his best in 2019, topping Sydney’s goal-kicking leaderboard and finishing fourth in the Bob Skilton Medal voting. The Gippsland Power product took on more time in the midfield in 2019 and is likely to again split his time between the forward line and centre bounce this year. Papley was selected in the AFL Players’ Association’s 22Under22 team in 2017.