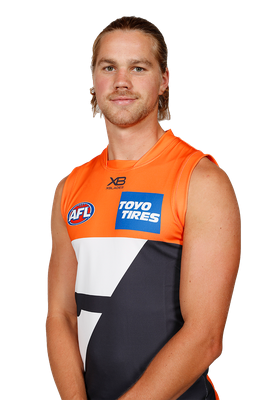 Harry Himmelberg is a mobile tall forward who relocated to Canberra from the Riverina once he finished school after an injury-interrupted 2014. A member of the GIANTS Academy, he was a regular top-up for the GIANTS in the NEAFL during his Under-19s year. Once arriving at the GIANTS as a first-round selection in the 2015 NAB AFL Draft, Himmelberg enjoyed a successful switch to defence and was selected to make his AFL debut in round 17, 2016. The next year saw Himmelberg play forward and down back before he established himself as a forward during the GIANTS' finals campaign, kicking four goals in the club's Preliminary Final. A star on the rise, Himmelberg has become one of the GIANTS' most consistent performers over the past three seasons.